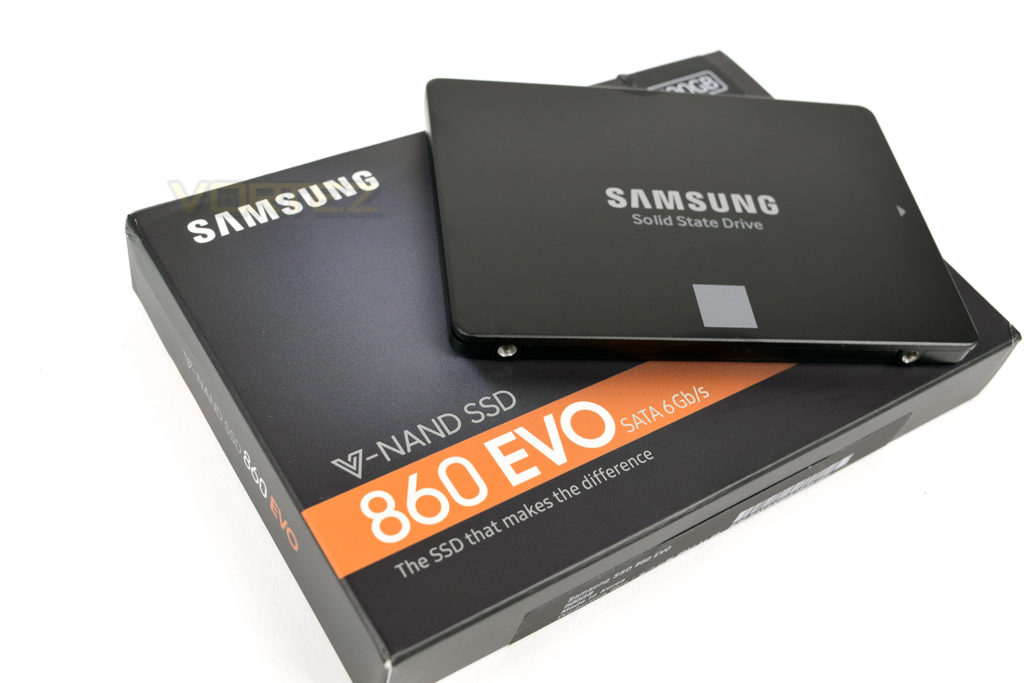 Samsung’s EVO SSD series is very popular in some countries to the point of outselling competitors by double margins. Today we focus on the company’s 860 EVO SATA SSD. How have they improved on the already brilliant preceding 850 EVO? Samsung seems to be clinging on its already proven formula to maintain its dominant market position.

Samsung has never been shy to price the EVO series SSDs aggressively when competition seems to be closing in. They also release better performing models when other manufacturers try to match them. Their 800 Pro models are generally considered to be the best SATA SSDs in the market.

Due to their 2-bit per cell (MLC) flash which is superior to TLC, the higher-end Pro models are exceptional under sustained workloads. However, MLC in consumer applications is a typical case of killing an ant with a sledgehammer. That is because consumer workloads are typically short and bursty.

This is where the EVO series comes in as it offers burst speeds higher than the Pro SSDs. However, that high performance lasts for only short periods. Samsung prices the EVO just above competitors’ but close enough for consumers to dish out a little more for their superior product.

The limiting SATA interface speeds see to it that the 860 EVO SATA SSD cannot outpace the competition on the performance front alone. Also, they have lost the advantage they had with V-NAND technology. That is because almost all manufacturers are putting out quality 64-layer 3D NAND.

The V in V-NAND denotes verticality where flash cells are stacked vertically and in 3 dimensions for higher density and speed.

Also Read: How to install an M.2 SSD drive in a laptop

Samsung’s 860 EVO SATA SSD is available in a wide range of storage capacities from 256 GB all the way up to 4 TB. As earlier alluded, this SATA SSD utilizes 3-bit per cell (TLC) flash while reserving a 2.3% NAND capacity for caching and background tasks.

This reserved capacity is intended to make up for the lower performance in native writes for the TLC. Whereas in the past few years many manufacturers have been shifting attention to M.2 SSDs, Samsung continues to announce new SATA SSDs.

Compared to the 850 series and the 860 Pro, the 860 EVO SATA SSD differs slightly on paper. However, those specifications are measured with high queue depth workloads that are applicable only to professional use cases. Consumer workloads tend to be bursts of activity occurring at low-queue depths with extended idle times in between.

All capacity points for Samsung’s 860 EVO SATA are listed as having identical performance specifications. They all have read/write throughput of 550/520 MB/s and random performance of 98,000/90,000 IOPS read/write. You will be pushing the 860 EVO SATA hard with intense multitasking for you to come close to those heights.

The 860 EVO SATA SSD has an MJX controller which is compatible with low power DDR4 memory. It also has smaller lithography for cooler operations. The 64-layer V-NAND is claimed to have 30% more power efficiency than the preceding 48-layer V-NAND. That was achieved by lowering input voltage to 2.5 volts from 3.3 volts.

The program time is also 1.5 times faster than the previous generation which is now at 500 microseconds. Samsung’s 860 EVO SATA SSD has support for hardware encryption with Microsoft’s eDrive and TCG Opal. The company is keen to mention improved NAS usage and Linux compatibility for the 860 Pro but not for the 860 EVO.

Samsung’s premium price for the 860 EVO SATA SSD exposes it to budget NVMe SSDs which boasts of even better performance. The 860 EVO has endurance ratings of 150 TeraBytes Written(TBW) for each 250 GB of storage capacity.

Only the Pro version beats that endurance figure with 300 TBW for every 250 GB capacity. This product also carries Samsung’s standard 5-year warranty.

The 860 EV0 SATA SSD is supported by Samsung’s Magician software as well as with Rapid Mode. Rapid mode is a DRAM cache algorithm from Samsung that reduces wear on the flash and enhances performance. The Magician software is important for testing and monitoring the drive.

The software can also be used to create bootable thumb drives. Owners of the 860 EV0 SATA SSD also have access to Samsung’s data migration tool which can clone data to a new storage media from an existing drive.

Do you agree that Samsung’s 860 EVO is a worthy successor to the 850 EVO? Please share your opinion with us in the comments section below.