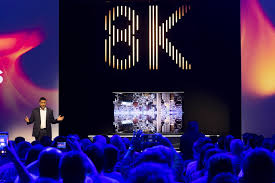 8K TVs are the new rage now, offering four times as many pixels as your 4K TV showing how fast pace the TV tech is going. Just when consumers are getting used to the 4K TV craze, coming from being a prototype or a concept thing, the 8K TV is here. 8K TV are still scanty in the market though. You’ve got the Samsung QLED Q900FN 8K TV already on sale with a release of the 88-inch OLED 8K TV from LG too.

Now that the so much talked about 8K or 4320p TV is here, there are some things you need to know before you plan to acquire it. As nice as the idea of having an 8K TV in your home is, there is really not much need to own one for now. A higher resolution is not enough reason to opt on a new TV, there are other things involved.

What’s the point of having a TV without anything to watch with it? That’s the question I want you to ask yourself because that’s what will be happening if you get an 8K TV now. 8K content is far from being available. In fact even 4K content isn’t being broadcasted yet. The only company broadcasting 8K video signal is a Japanese company called NHK and even then, content is very limited. 4K content is just only beginning to circulate in both streaming and satellite media.

Only recently did the PlayStation PS4 Pro and Xbox One X start rendering 4K graphics. The sheer processing power required to render 4K content is immense and lets not even talk about 8K. Not much production companies are making 4K Videos and you’re lucky if you find content that is 4K all the way. This is because visual effect companies are limited to 2K and in a way that resolution is easier to work within the film industry. All of these makes it quite difficult for 8K content to be quite commercially accessible for now.

Watching lower resolution videos on your 8K TV will not come out well as it will on lower resolution display. For example, 4K content will look better on a 4K TV than it would on an 8K TV.  Okay, there is AI upscaling like the one offered by the 85-inch Samsung 8K TV which brings lower resolution content to 8K. I’m not denying the fact that improvement will be made but an upscaled 8K video is nowhere near the native one. You can’t just make up for data that is absent and fill it in to make for the ones that are not there.

Apart from the fact that there is no content, the 8K TV is expensive like the Samsung 85-inch Q900 8K TV costs £15, 000. That’s extremely high price to pay for a device that does not have much use. Good luck with that!

To stream 8K content when its available, you will need a super fast internet connection to prevent any noticeable buffering. At the moment, you’ll need at least 50Mbps dedicated to just streaming 8K videos. Most parts of the world, these speeds are either not being offered to consumers such as in Uganda or the package is way to expensive to afford.

How about if there were 8K content and we have enough of them around, even at that. How would you be able to get them? Working with 4K resolution means you will be dealing with a lot of data and at 8K, the tonnes of data you will be working will be going into hundreds of gigabyte that is even after compression. This makes it even harder to stream or let’s say store. An ultra HD Blu-ray can’t even fit an 8K film. Using an 8K TV would require a change of all the setup you’ve got before to be able to cope up with that amount of data.

Even if the TV has an HDMI 2.1 port that can handle 8K content, besides the Xbox One X there is hardly any other device you can connect it to. The HDMI 2.1 certified cable is not even easy to come by.

How much difference can you make out from staring at a 4K and 8K TV placed side by side without moving closer? The answer is not much distinction is noticed at the end of the day. It is known that an 8K TV offers four times more pixels than a 4K TV and 16 times the pixels on a 1080p screen. However, there is much more noticeable distinction between a 2K screen and a 4K screen compared to that of a 4K and 8K TV screen below a screen size of like 95-inch.

Do you really want to be an Early Adopter?

There are various downsides to being an early adopter which is what you will become if you buy the 8K TV now. Besides the whole compatibility with accessories issue, there is also the truth that this TV is going to get way cheaper than it is with time. Which means in a year or so, you will be looking at a much more lesser price. In addition to being cheap, the new tech will be perfected with time. That means you will not only be having a cheaper 8K TV if you wait but it will also be better.

A better choice the 4K TVs which have been around for a while and still offers quite an immersive visual experience. There are relatively much more contents to enjoy on 4K TV if at all you are looking for something exuberant.