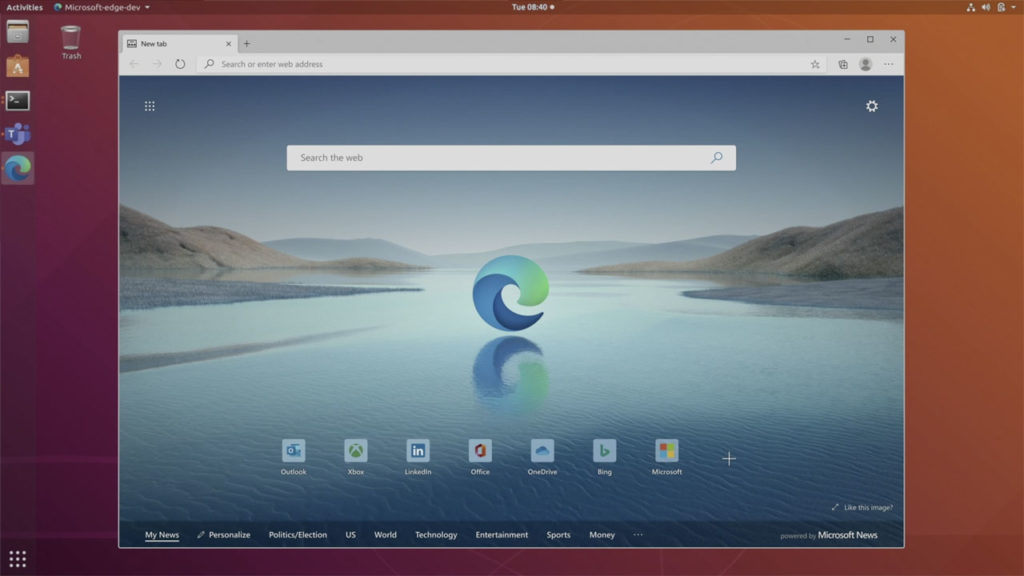 Google’s Chrome browser absolutely dominates in the desktop browser market segment and for the most part, forms the standards to which the web is developed on.

It is for this reason that Microsoft decided to ditch its feeble attempts at pulling off another Internet Explorer dominance by basing the new Microsoft Edge on Google Chrome’s open-source Chromium project.

Initial reviews point to a more coherent user experience in the new Microsoft Edge with the same close ties to Microsoft but with a more Google Chrome-look and feel.

At the time of writing, the Chromium-based Microsoft Edge is available on Android, iOS, Windows and MacOS. Conspicously missing from that list is our favorite open source operating system, Linux.

Today, if you visit Microsoft Edge’s download page from your Linux PC, you’re met with that big fat message notifying you that your system is not supported.

Interestingly, we know that Microsoft Edge is coming to Linux at some point and from recent reports, pretty soon. This means that there is a developer version of Microsoft Edge for Linux out there. A ray of hope to Linux users who have been longing to use the browser on their PC.

There’s been an insider program for Microsoft Edge for Linux for a while now. And while there isn’t an official Beta build yet, users can still install these early builds on their Linux machines.

Big disclaimer: these are very early builds and not everything works just yet. Matter of fact, not all Microsoft Edge features will make their way to this Linux version of the browser.

How to Install Microsoft Edge on Linux

There are two ways to install Microsoft Edge on your Linux PC. First one involves adding the PPA keys to your system. To proceed, simply fire up the Terminal by holding Ctrl + Alt + T.

Then, just copy and paste each of these commands, one after the other.

Once the setup is done, simply reboot your Linux PC and open the Microsoft Edge Dev app to proceed.

Read More: Why use Ubuntu as your primary Operating System?

The second method, and frankly my favorite, is heading to the Microsoft Edge repository and grabbing the latest .deb file available.

Once you have this downloaded, navigate to the location of the file using the file manager and ‘Open in Terminal.’

Then, proceed to paste the following into the Terminal console:

Hit Enter then input your password. This should install the package on your device so sit tight and wait for it to complete.

Should the setup end in a dpkg error like shown above, worry not. Simply type in;

This should install all pending dependencies and after the setup is complete, you should be able to run Microsoft Edge Dev on your Ubuntu.

And that’s it! You’ve successfully installed Microsoft Edge on your Linux computer.

Beware though, there are bound to be a few issues with this build. Some that I ran into include the inability to sign into my Microsoft account on the browser. This means that all the synced passwords, extensions and themes from your other Edge browser instances are unavailable at least for now.

It is so refreshing to see Linux as a platform coming into its own as a viable alternative to Windows and Mac by supporting native first party apps.